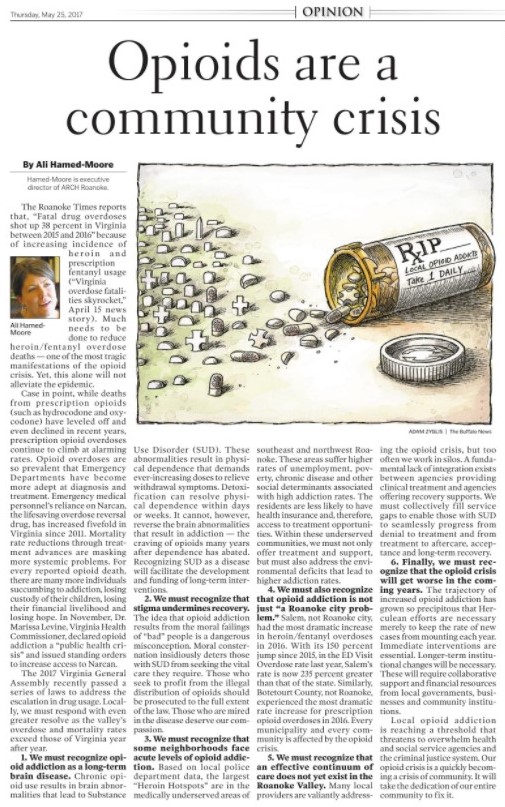 Opioids are a community crisis

The Roanoke Times reports that, “Fatal drug overdoses shot up 38 percent in Virginia between 2015 and 2016” due to increasing incidence of heroin and prescription fentanyl usage. (Virginia overdose fatalities skyrocket, April 15)  Much needs to be done to reduce heroin/fentanyl overdose deaths – one of the most tragic manifestations of the opioid crisis.  Yet, this alone will not alleviate the epidemic.

Case in point, while deaths from prescription opioids (such as hydrocodone and oxycodone) have leveled off and even declined in recent years, prescription opioid overdoses continue to climb at alarming rates.  Opioid overdoses are now so prevalent that Emergency Departments have become more adept at diagnosis and treatment.  Emergency medical personnel reliance on Narcan, the lifesaving overdose reversal drug, has increased fivefold in Virginia since 2011.  Last year, Narcan was administered in the Roanoke Valley at a rate nearly 50% higher than the state rate.

Mortality rate reductions through treatment advances are masking more systemic problems.  For every reported opioid death, there are many more individuals succumbing to addiction, losing custody of their children, losing their financial livelihood and losing hope.

Locally, we must respond with even greater resolve as the Valley’s overdose and mortality rates exceed those of Virginia year after year.

1.     We must recognize opioid addiction as a long-term brain disease. Chronic opioid use results in brain abnormalities that lead to Substance Use Disorder (SUD).  These abnormalities result in physical dependence that demands ever-increasing doses to relieve withdrawal symptoms.  Detoxification can resolve physical dependence within days or weeks.  It cannot, however, reverse the brain abnormalities that result in addiction – the craving of opioids many years after dependence has abated.  Recognizing SUD as a disease will facilitate the development and funding of long-term interventions.

2.     We must recognize that stigma undermines recovery. The idea that opioid addiction results from the moral failings of “bad” people is a dangerous misconception.  Moral consternation insidiously deters those with SUD from seeking the vital care they require.  Those who seek to profit from the illegal distribution of opioids should be prosecuted to the full extent of the law.  Those who are mired in the disease deserve our compassion.

3.     We must recognize that some neighborhoods face acute levels of opioid addiction. Based on local police department data, the largest “Heroin Hotspots” located in the Medically Underserved Areas of Southeast and Northwest Roanoke City.  These areas suffer higher rates of unemployment, poverty, chronic disease and other social determinants associated with high addiction rates.  The residents are less likely to have health insurance and, therefore, access to treatment opportunities.  Within these underserved communities, we must not only offer treatment and support, but must also address the environmental deficits that lead to higher addiction rates.

4.     We must also recognize that opioid addiction is not just “a Roanoke City problem.” Salem, not Roanoke City, had the most dramatic increase in heroin/fentanyl overdoses in 2016.  With its 150% jump since 2015, in the ED Visit Overdose rate last year, Salem’s rate is now 235% greater than that of the state.  Similarly, Botetourt County, not Roanoke City, experienced the most dramatic rate increase for prescription opioid overdoses in 2016.  Every municipality and every community is affected by the opioid crisis.

5.     We must recognize that an effective continuum of care does not yet exist in the Roanoke Valley. Many local providers are valiantly addressing the opioid crisis, but too often we work in silos.  A fundamental lack of integration exists between agencies providing clinical treatment and agencies offering recovery supports.  We must collectively fill service gaps to enable those with SUD to seamlessly progress from denial to treatment and from treatment to aftercare, acceptance and long-term recovery.

6.     Finally, we must recognize that the opioid crisis will get worse in the coming years. The trajectory of increased opioid addiction has grown so precipitous that Herculean efforts are necessary merely to keep the rate of new cases from mounting each year. Immediate interventions are essential.  Longer-term institutional changes will be necessary.  These will require collaborative support and financial resources from local governments, businesses and community institutions.

Local opioid addiction is reaching a threshold that threatens to overwhelm health and social service agencies and the criminal justice system.  Our opioid crisis is a quickly becoming a crisis of community.  It will take the dedication of our entire community to fix it.